What's been happening at Area C? | Friends of the Mississippi River
Skip to main content

What's been happening at Area C?

With the Ford redevelopment project in the spotlight last fall, we began sharing more updates about our work on Area C, Ford Motor Company’s hazardous waste dump on the Mississippi River floodplain in St. Paul next to Hidden Falls Park.

Since 2017, we've been working with the Capitol Region Watershed District (CRWD) to get a better understanding of what’s happening at Area C, what the environmental risks are, and how we can secure the best possible future for the site. Together, we're advocating for stronger Minnesota Pollution Control Agency (MPCA) oversight of Area C.

The official process for cleaning up a site like Ford Area C takes time, and it can be tough to keep up with the developments. So here’s a summary of what you, FMR supporters, have helped accomplish towards a better future at Area C already, and what's still to come.

Thanks to advocacy by FMR and CRWD, the MPCA is requiring Ford to install more monitoring wells at the site in areas where significant groundwater might be flowing.

FMR and CRWD originally requested these wells back in 2018 and have advocated for them ever since. We hoped to see them finally installed this spring, but MPCA granted Ford an extension based on Ford’s concern about its budget during the COVID-19 pandemic. Installation is currently scheduled for fall 2020.

Ford is also required to begin testing for PFAS (also known as PFCs) for the first time. It’s our understanding that this testing is underway. PFAS compounds are increasingly understood to pose serious environmental and health threats. PFAS compounds have been nicknamed "forever chemicals" because they don't break down over time as some substances do. We don't know whether the waste dumped at Area C contains PFAS, but we think the public deserves to know for sure.

About 150 people attended the Area C community meeting in February 2020.

Another key concern has been that many community members don’t know about Area C, even if they’re frequent users of nearby parks like Hidden Falls and Minnehaha Falls. We figured that if people knew the history of the site, they'd want to have a say in what happens to it next.

FMR staff collaborated with neighborhood groups to spread the word about Area C. We’ve also done in-person outreach at the surrounding parks, recognizing that they are regional assets who draw many people from outside the immediate neighborhood. And we’ve created informative videos and articles that have drawn thousands of views. If you shared these pieces or talked to your neighbors, thank you!

This outreach helped garner an impressive turnout of around 150 people to MPCA’s community meeting about the site back in February. A few months earlier, FMR and CRWD had requested that the MPCA hold this meeting to inform the public and explain their process so far.

MPCA staff had told us that they weren't hearing much from the public, so they didn't think there was much community concern about Area C. The turnout to this community meeting made it clear that they were wrong.

FMR also worked with several local media outlets to raise community awareness about Area C as well. This has brought media attention to Area C from neighborhood newspapers as well as regional outlets like KSTP. We’ve even taken reporters out to the site.

Community advocates also helped by writing letters to the editor that were published in multiple newspapers. These outreach and publicity efforts are resulting in an informed and engaged community process, as well as sustained attention and transparency for this years-long cleanup process.

After installation later this year, the new monitoring wells will be monitored for one to two years to capture year-round data. Since high water events actually innundate the toxic waste, experts have advised collecting data from at least two flood cycles. After that, Ford will incorporate that data into a feasibility study.

The feasibility study will explore different options for cleaning up the site, weighing factors such as environmental risk, cost and community acceptance. The public will have a chance to weigh in on a draft of the study, after which the MPCA will select a cleanup alternative and request that Ford implement it.

Cleanup alternatives considered may range from minor actions, like requiring ongoing monitoring and addressing surface debris and erosion issues, to full removal of the waste pile.

We'll let you know when the feasibility study is ready for public comment in 1-2 years. (Sign up for updates.) In the meantime, we’re advocating with the MPCA about which cleanup options we think merit attention, and we're requesting more frequent, more transparent engagement between the agency and the community.

We’re also closely monitoring other future happenings that would affect Area C, such as the city’s proposal to install solar panels atop the waste pile and the consideration of whether the Ford Lock and Dam should be removed someday. 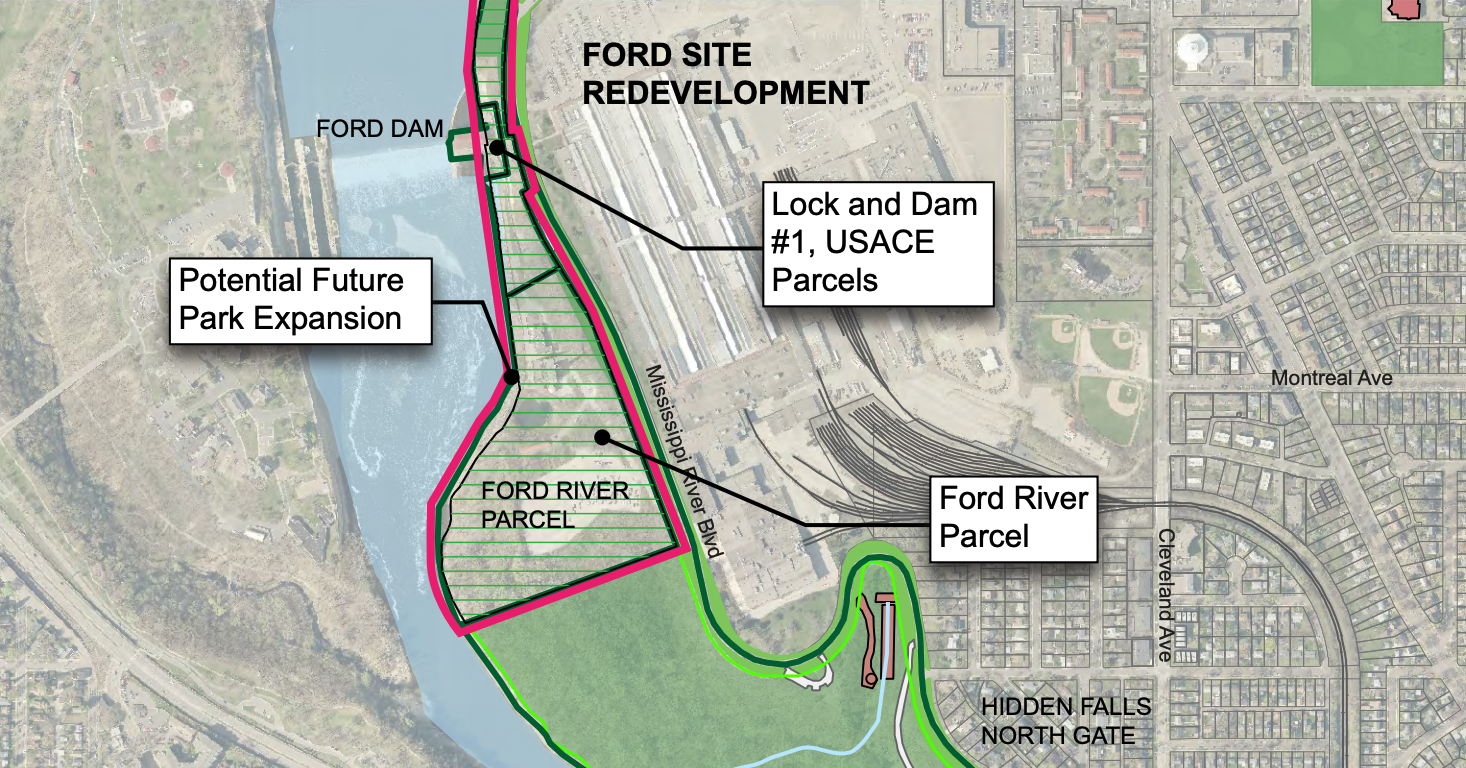 City plans, such as the 2019 Hidden Falls park master plan shown here, document public desire for Area C to become public parkland after it's cleaned up.

What does the community want in the long-term?

In recent years, St. Paul residents have already signaled what they want from Area C: more parkland to be added to Hidden Falls Park. This desired park addition is named in both the city’s Great River Passage Master Plan and the Hidden Falls-Crosby Farm Regional Park Master Plan.

Both of these planning processes included extensive stakeholder and community engagement as well as the approval of city leaders. We’ll continue advocating that MPCA take this community desire into account as it studies the future of Area C.

If you'd like to be notified of opportunities to weigh in on Area C's future and other local riverfront plans and ways to protect the river's health, sign up for our Ford Area C email list.