Mystery building near Lake Street Bridge to reduce odors, but stands to be improved | Friends of the Mississippi River
Skip to main content

Mystery building near Lake Street Bridge to reduce odors, but stands to be improved 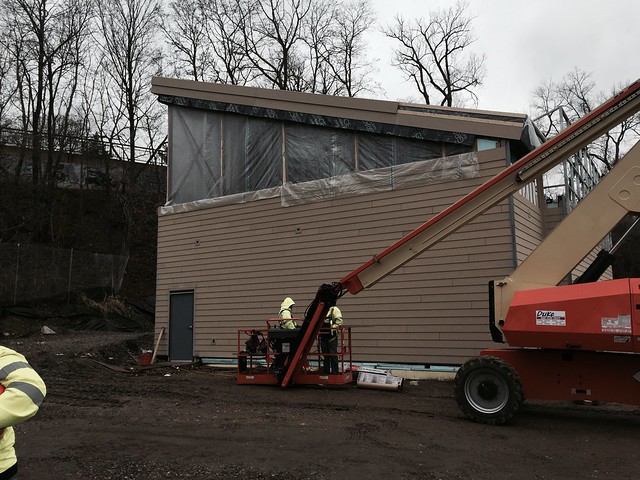 While a new facility near the Lake Street Bridge will help reduce sewage smells, steps could have been taken to reduce its visual impact as well. Hover over the picture and click the arrow on the right for more photos of the site.

After calls from several concerned residents and local volunteers, FMR began looking into a new structure being built in the Mississippi River Gorge. Located just upstream of the Lake Street Bridge on land owned by the Minneapolis Park and Recreation Board, the new building-in-progress is the Metropolitan Council's West Metro Odor Control Facility.

Although the community will benefit from reduced sewage smells, we're concerned about the structure's visibility in this highly scenic area as well as the lack of meaningful opportunities for community members to provide input.

Sewage pipes from much of the West Metro converge at this site. Here, they drop their contents into deeper pipes that then carry the sewage under the river and on to the Metropolitan Wastewater Treatment Plant east of downtown St. Paul. When the sewage drops, sewer gasses are forced out. For years, smells were managed through use of a biofilter (a.k.a. woodchips), but results were mixed and local residents and park users requested improvements.

The new odor-control structure will house four carbon filters that should prove far more effective. Scheduled to come online in early 2017, the small building will soon be fitted with a charcoal gray metal roof along with frosted windows in the north and south roof peaks. Next spring, it will be painted more natural colors and the lot will be revegetated with grass.

FMR deeply appreciates the important work of the Met Council to manage our wastewater keeping our river clean and associated odors at bay. The agency is a valued partner and we have collaborated on numerous projects over the years. At the same time, we have a number of concerns related to the new facility due to its location in a significant, scenic riverfront location.

Between the flowing river and forested banks — bright green in summer, brilliant in fall and stark but stunning through winter — this is a special place to the many people who live, work and recreate in Minneapolis and St. Paul. It provides much-needed respite from our bustling urban environment while also supporting it by attracting people to the area.

This area is also nationally significant. The new building is situated within the only true river gorge the length of the Mississippi River. This stretch of the river was established as public parkland more than 100 years ago. It's also part of our local national park, the Mississippi National River and Recreation Area — the only park in the nation dedicated to the Mississippi.

For these reasons and many more, hundreds of people count themselves as River Gorge Stewards, volunteering their time and talents to preserve and protect this local and national treasure.

This is why we're concerned that a new building has been erected within this natural, mostly structure-free public park.

FMR's concerns include the following, with the acknowledgment that the facility is nearly complete.

Building Height
While we appreciate that the majority of this structure exists below ground, we would have preferred Met Council Environmental Services to go the extra distance to locate it completely below ground, with the exception of the carbon filter exhaust pipes, or, if feasible, locate the structure further from the river.

Roof Line
We understand that the roofline is slanted toward the bluff to mimic the style of the nearby boathouse of the Minneapolis Rowing Club and to provide space for high windows and a natural light source inside the building. But a flat, green roof would have better minimized the height of the structure and helped camouflage the building within this sensitive, public.

Windows
We appreciate that the windows high on the north and south sides of the building will be frosted to reduce bird collisions in this important migration corridor. We also appreciate the effort to provide a natural light source for the building's interior. However, since the building will be empty most of the time, with just one worker performing a short check-up on a weekly basis, we don't believe the potential energy savings don't justify the windows more disruptive appearance in this sensitive area.

FMR staff were unaware of the project and can find no evidence that we were contacted about the public input process. The surrounding Longfellow neighborhood has many active and engaged residents and a standing River Gorge Committee who care deeply about the river gorge. Yet each public meeting on this project was attended by zero to one person. While Met Council Environmental Services may have met the legal requirements for a public participation process, we're disappointed that they didn't seek greater public input.

It's also disconcerting that such scantily attended public meetings should satisfy any public participation requirements. If no one attends your public input meeting this should be considered a failed attempt requiring renewed efforts and utilizing different outreach methods.

Finally, projects such as this should have webpages that facilitate transparency. Renderings or architectural drawings are nowhere to be found on this project's site, nor does it include a public participation plan, past community outreach and meeting information, or clear opportunities for community feedback. The project contact information and construction updates from May 2016 onward are helpful.

This project is located within the Mississippi River Corridor Critical Area, a state land-use designation managed by the Department of Natural Resources (DNR) and Met Council. Protecting the scenic qualities and sensitive bluffs of the river corridor are important goals of the critical area program, and few places are more significant than the river gorge.

According to state critical area rules, both the Met Council’s local planning assistance staff and DNR land-use specialists or hydrologists should have weighed in and commented on this project. After reviewing available materials, it is unclear whether this took place.